I’ve been a long time fan of the Card Readers Handbook system by ➡ Regina Russell. Actually, I used the layout below prior to reading the Tarot decades ago. With so many decks to play around with you should always revisit systems you liked because if you don’t use them you can forget the meanings. The deck used in the layout below has some keywords specifically for this purpose. 🙂

Not much content has changed with the handbook as far as I know.  My book is from the mid 1970’s. It is still available at the link above which takes you directly from Regina Russel’s Tea House in Quincy, MA.  Back in the day, I took the handbook apart, hole punched the pages and put them in my binder. I have lots of additional notes which came from actual experiences with the system meanings.

I have used this layout with various decks of cards. It is perfect for the Lenormand and Gipsy style systems because fans of three cards is usually adequate to get the drift of a theme or topic.  The image below shows you how to lay the cards. By following the circled numbers you should have no problem. I labeled the fans as well and of course, I forgot to label the right fan. It would be a new situation coming most likely with one month. Well, that’s the time frame I use.

My procedure is to shuffle the cards, cut them and them select a random card from the face down cards in my hand. Or you can just shuffle, cut and take the top card and so on. It’s always up to the reader to do what ‘feels right’. 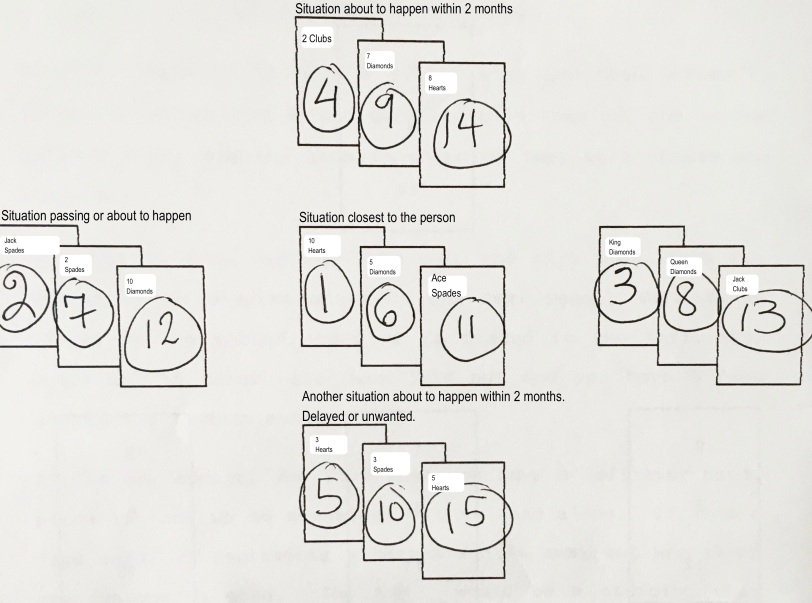 Below is an image of the actual reading. You can see the keywords written on the cards. These are by no means all of them but they are good to get the memory going especially if you (like me) memorized every meaning, lol. 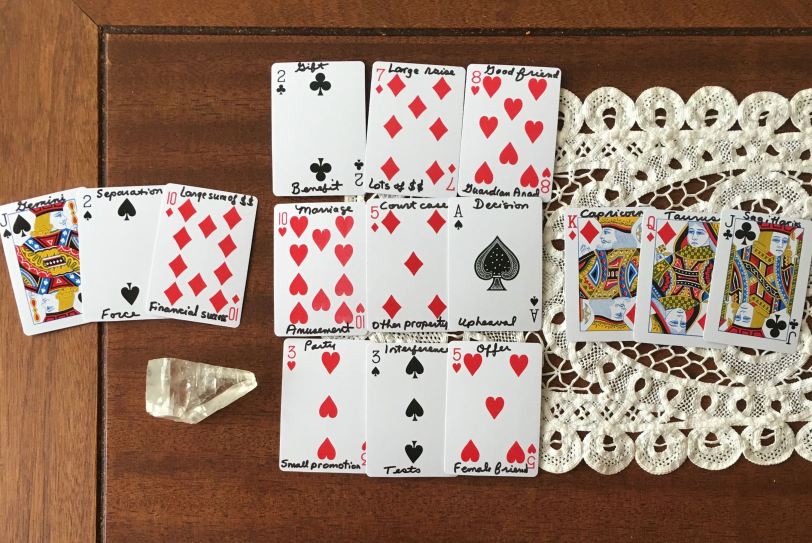 I like to count the suits to give me an idea which level of one’s being is foremost.  The courts are people in the life of the client but they can represent the energy of that suit. I have labelled them with Astrological signs because I happen to remember the essence of the card in that way.

The suits are fairly even with the exception of the clubs. With this we can see that the client is won’t be too active over the next 2 months although the right fan is topped by a club suggesting a more busy time with 1 month.

Before doing this reading I was talking to a friend that shared her daughter was having marital issues. I decided to throw the cards to see if something came up. And sure enough the left/middle fan reflect that conversation.

CENTER FAN: 10H 5D AS.  Usually you start here but it is a good idea to study all the fans especially the one to the left because it will tie into the middle cards in one way or another. These card point to the topic of a marriage with a decision already made about it. The Ace of Spades is last and if it was the first card then the decision was yet to be made. The 5 of Diamonds points to a possible legal case. It also talks about another location other than the matrimonial home.

LEFT FAN: JS 2S 10D. When the 2 of Spades follows a court card it means a separation from that person. Note that the 3 of Spades lies in the bottom fan (delays/unwanted). When these two spades combine the suggestion is a harassing situation caused by a vindictive person (Jack of Spades). The final card talks about a large sum of money much bigger than the 7 of Diamonds (top fan). There is a gamble involved with this card because both the 2 and 3 of spades are in the layout.

RIGHT FAN: KD QD JC.  A group of Court cards side by side in a fan depicts other people involved in the client’s life/problem. If we read the Ace of Spades preceding the King of Diamonds then someone with financial know-how is coming back into the client’s life for a specific reason. These three courts could be people working in an office or some area that can address the client’s problems. This will go down within a month give or take. The fan ends in a clubs showing the speeding up of the situation. This Jack also looks away from the layout so there is someone who is not into the client’s situation.

BOTTOM FAN: 3H 3S 5H.  The two 3’s side by side amplify the meaning of this combo. There is a 3rd party involved in a romantic kind of way (spade surrounded by hearts).  Even though 2H+3H+3S suggests a con artist it’s close enough to use that meanings with the 5H.  A romantic situation will develop within two months. Don’t forget it falls in the bottom fan. There will be delays with this development even though the fan ends in the 5H. Since the 5H tops the fan the client will receive a romantic opportunity which seems to answer all her questions which a not related to her actual marriage. She just want to live under better circumstances than she is now.

UPPER FAN: 2C 7D 8H. It’s always nice to see the Hearts suit topping a fan especially in the future months. Opening clubs suggests help is given. I think this will be mutual because of the last card which is one’s guardian angel plus a mutual love and admiration. It is a very good friend the client can trust. The 7 of Diamonds points to an increase in finances and a pleasant one at that (hearts top fan).

The client will get romantically involved with a friend while going through a stressful separation with her husband. No direct violence or abuse is shown – no King of Spades or high spades. The 2+3 of spades fall in different fans, however it does imply a potentially negative experience. The top cards of the fans other than the Ace of Spades are all generally positive. Her money situation will be resolved. She could also move but there are no change of residence cards. She may look at another place but not go there during the time frame of this reading.