I asked the Art Deco fortune-telling cards about career opportunities for a regular client. Most Sibilla style decks contain cards depicting every day situations, emotions and experiences. So, if you know one meaning for the same themed card you can transfer it to many other decks. 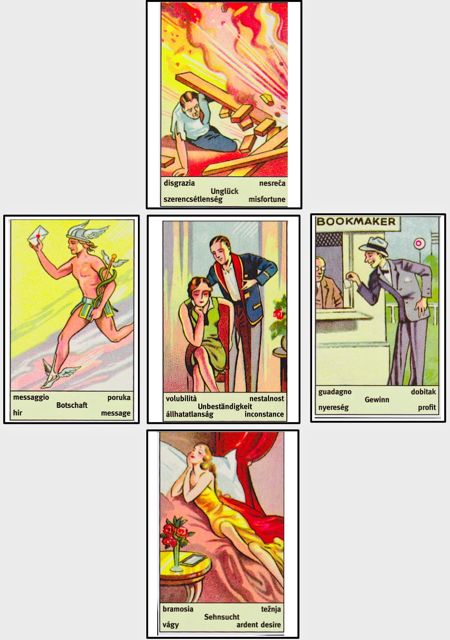 I think a 5 position layout is good enough for this question. We have all the bases covered. You can lay the cards out whatever way you want. I chose to do a “t” version using 5 cards.

The Center card is the energy surrounding client & her question at this time. 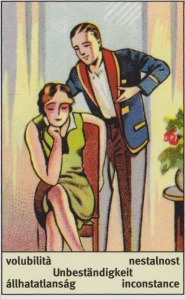 The uncertainty around the female’s questions is reflected in this card. The good thing is that situation is in a changing state which means she may find some meaningful work. The rest of the cards will expand on this energy.

In the image it looks like the male is trying to explain a situation or his point of view on a matter. The female seems undecided. He could be attempting to persuade her into attending a function and she doesn’t seem that enthusiastic about it.

Veronica could have some options or opportunities but is a little apprehensive in accepting them.

➡ Inconstance is not part of the 36 Zigeuner Wahrsagekarten (Gipsy) deck.

The Left card is the influence which has just passed not too long ago.

It looks like the female has already gotten some news in connection to work/career. There may have been an opportunity but this was not revealed to me. Maybe she wants to wait and see if anything will materialize out of this “message”. Sometimes your client won’t tell you why they are asking the question and sometimes they think they know an outcome already.  When a card reading confirms their own thoughts about their question then they have more optimism. As long as it’s something they really want to hear then it’s ok.

The Top card is what’s on Veronica’ mind or her attitude.

I want to read this card to mean that Veronica is expecting the worst given her track record in the past has not been the greatest. I don’t feel she is thinking about some devastating news she just received. Sometimes when you get knocked down too many times in life you go into safe mode. You expect the worst but hope for the best.

The Bottom card is the influence just coming in.

Looks like the female is longing for a good career to the point of having a love affair with the notion of being successful.  This type of wishful thinking if it is quite clear in intention can manifest. Most importantly there has to be some practicality to the thinking as well.

The Right card is the probable future or answer to her question.

Career prospects look promising. This card of increase suggests there will be work/job. The subtle message of this card is “nothing ventured nothing gained”. It’s best she applies for jobs even if she thinks the “odds” are against her. The gamble will probably pay off.

➡ Profit is not part of the 36 Zigeuner Wahrsagekarten (Gipsy) deck.

You can purchase this lovely deck from Piatnik.