INSTRUCTIONS for the Heart Layout:

1. Remove the Significator cards from the deck prior to shuffling. Place them on the table so that there is room for one card between them.
2. Shuffle the cards thoroughly thinking about your question about the relationship. Maybe you don’t even know what you are really are thinking/feeling. The cards might reveal additional information you hadn’t expected.

3. Cut the deck as many times as you feel necessary and proceed laying the cards according to the image.

It doesn’t matter which column you insert the Significator cards but I usually put the person I am asking about on the left side. The client or you (if it’s your reading) to the right side. You should decide on this ahead of time. Some decks the Significator cards will face each other and other decks they won’t. For the purpose of this layout the directions of the Significators have less impact on the overall reading, however, they can be used. The reason I am saying this is because you have chosen a certain Lenormand deck. These days cartomancers have more than one version at hand.

Years ago when I performed one on one consultations the client did not tell me much about their background. It was probably a sign of the times and the stigma connected to “fortune tellers”. Luckily, this has changed to a certain degree these days because the client knows if they tell you a bit of why they need the reading you can help them more. It’s such a waste of precious energy playing the guessing game with common information.

Background to the question:

Woman K is experiencing estrangement from Man J she cares about. Lately, she heard he might be moving far away from her which would create challenges in them reuniting or taking steps towards a reconciliation. The woman wants to know if this is the end of this connection/relationship with the man if he moves and perhaps, even if he does not relocate. She is holding on to some hope they will get back together as a couple. 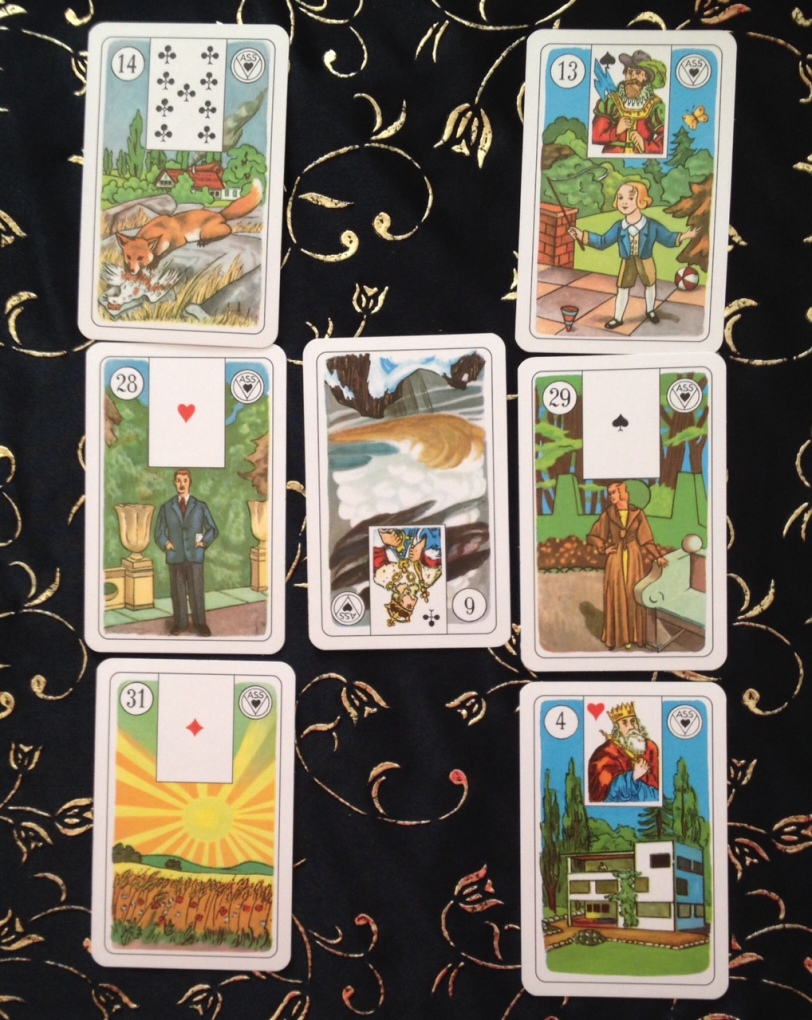 Notice that the Clouds card fell reversed. More on this card after the other cards are studied. If this happens when you lay the cards you can place the card upright if you are not comfortable reading reversals. There are no set rules for reversals other than the Lenormand is not read this way. Of course, it is a personal choice if you want to explore potential meanings. In my view, this card fell upside down for a reason but for the most part Lenormand cartomancers will not read reversals.

Card #1: Let’s begin with Man J on the left side of the Heart layout. So, what’s on his mind? The Fox card is a very challenging energy when it touches the Significator card of someone you care about. Don’t forget, the Fox could also be describing his general outlook at the time of shuffle. It doesn’t mean that Man J is being sneaky around Woman K. Often the Fox card shows the person is a strategist. He plans his next move. If this relocation opportunity is around him he is probably looking at all angles before he decides much like a fox vetting (critical observations) the chicken coop.

Card #3: Looks like he is facing a very successful influence with the Sun card shining the path ahead of him. How does this card play into Woman K’s question? Is there hope for them? I think Man J is more interested in what’s in it for him. He wants to get on top of his game. The Fox card often represents one’s work as well although I don’t use that meaning often. His job might require the skills of a fox.

Card #2: Woman K is thinking about this new situation which she has heard of recently. The Child card is all about new beginnings as well. Is this on her mind? She may feel at a disadvantage with this new information surrounding him, if in fact, it is a reality. She just doesn’t know what to do. She is in need of emotional guidance like a small child venturing out into the big world. On one hand, Woman K may be a little naive because of the two people Man J is more worldly and experienced.

Card #4: Woman K is facing the House card. This means the stability and security of her immediate environment will be very important to her. She is not about to give this up that easily. She will be thinking about where she lives and what it means to her. She also knows that “home” is where the “heart” is.

Card #5: The outcome is the Clouds reversed.  Woman K wants to know where if anywhere she stands in his life. Is she part of his future? Will they resume a relationship somehow? If the Clouds card was upright I would say there is little hope for an easy solution to this situation. So much is unclear right now.

When the Clouds card is reversed it would intensify the lack of clarity between these two people. The King is reversed which adds the not so nice qualities to the Gentleman card. Man J most likely will not be thinking straight where Woman K is concerned. She doesn’t need someone who is not sure of her. She needs a man who has confidence in their connection and can appreciate all the blessings she can offer him. He’ll do alright on his path since he is facing the Sun card, well, at least for two or three months. She will hold on to her own power and not lose hope.

The cards are advising Woman K that there will not be any fast movement or progress insofar as their connection. He’s just not sure. If the outcome card was the Scythe card then there definitely would be a severance of all hope to a possible reconnection. However, the energy in lingering which does not provide a definite yes or no answer. Woman K is strong (King of Hearts- House) and will cope with what’s to come.