WHAT SHOULD I KNOW layout – 7 cards

By seaqueen September 18, 2015 gipsy cards WHAT SHOULD I KNOW 7 card layout

The WHAT SHOULD I KNOW layout can be used with any deck that has Significator cards or if preferred a THEME card. To illustrate this layout I have used the Hungarian version of the Zigeuner Wahrsagekarten (Gipsy cards). As you can see in the image my cards are cropped and cornered.

How to use the layout.

After you have decided on the Significator card and placed it on the table SHUFFLE the rest of the deck.

That’s it. Easy enough. The reading below is a question from a woman (Debbie) asking about a man of interest. She wants to know what HE (Adam) thinks about being in a relationship with HER. Just remember that the above and below three cards will be HIS perspective and not hers.

If the woman wants to know HER own perspective about the relationship, the SWEETHEART card should be the Significator. Often, we do not know how we feel about relationships even if we are in them. 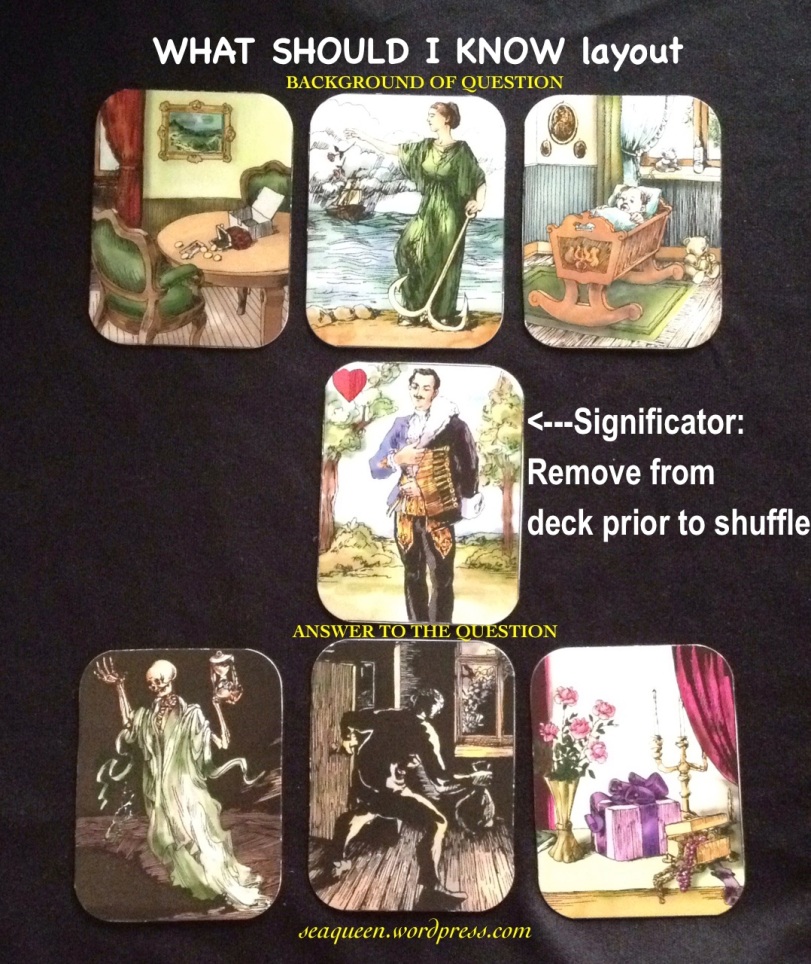 The relationship was not too important to Adam. The background cards provide a summary which should lead up to the answer. He is involved but not deeply (some money). The Hope card could suggest he’s always keeping his eyes open to other opportunities. He views the relationship as being in the early stages. There is a lack of maturity (baby) in the over all experience. He’s not that serious.

Looks like Adam may not have enough feelings to sustain (death) this relationship.The Thief is directly under the Lover card so he could be trying to get away with things in the relationship. You know – have your cake and eat it, too. The final card says it all. He is in this relationship with Debbie to get all the good things that are offered. When coupled with the Thief this indicates his perspective is to take what he can.

The cards were quite abrupt in what they hinted. You shouldn’t ask the cards a question unless you are prepared for the answer you might receive.

2 thoughts on “WHAT SHOULD I KNOW layout – 7 cards”