The interpretation of the 5 card Advice layout. Question: The female would like to know if the reading she received from a psychic will come true in the way it was predicted. 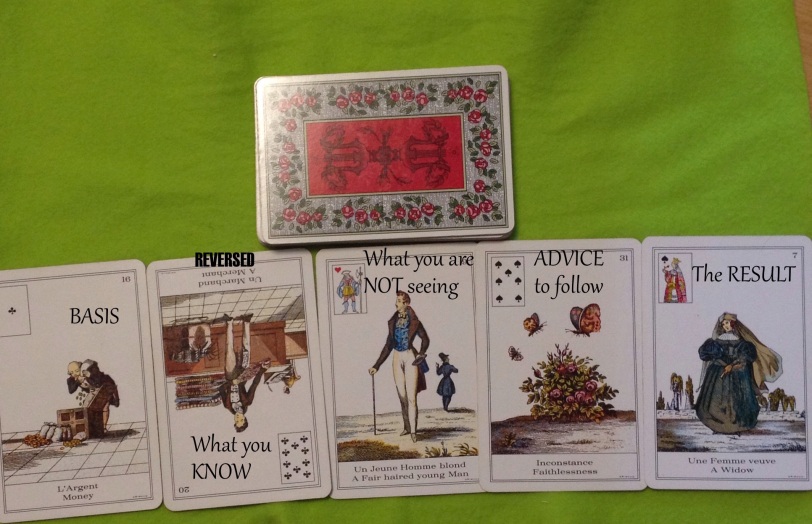 BASIS: Money – This card is all about gain usually connected to a financial matter. The psychic may have predicted an issue regarding the female’s finances. It could be something simple as paying the psychic’s fee.

WHAT YOU KNOW: Merchant reversed – The meaning in the accompanying booklet states there could be danger of fire or some kind of damage. Also, that there would be a refusal to participate in some manner. The way I want to read this card in relation to the question is the female received some information from the psychic which could pose some challenges or problems. In the upright position, the Merchant card is connected to financial gains as well. Given it is reversed it could suggest an outlay of money may be pending and the female was told this.

WHAT YOU ARE NOT SEEING: Fair-haired young man – this card represents happiness in the home. The middle position often reveals unknown influences or an area of life which is not being appreciated or addressed. As a person card the suggestion for the female is to pay attention to the activities of a younger man with lighter features and how this male plays into the psychic’s prediction.

ADVICE TO FOLLOW: Inconstance – the booklet calls this card Fickleness or Faithlessness. It is not really a positive card because it indicates failure of plans or hopes deceived. So, how does one read a negative card as advice to follow? Getting back to the original question asked of the cards Inconstance is a warning that there could be some deception involved with the actual prediction. It’s not intentional deception but more untrustworthy information. The female is advised to keep in mind that the prediction is rooted in changeable energy. That is precisely why the prediction could fail.

RESULT: Widow – very interesting write-up on this card. The Queen of Spades is suggesting that the advice is to be followed (prediction by psychic). This card is all about taking a gamble as well. I want to read this “gamble” influence as a form of speculation regarding the prediction. This tells me the psychic was taking a risk relaying the information she did. Where there is risk there could be danger. The danger is that the prediction could jeopardize the female’s peace of mind which it did.

How would one answer this question?

As I said in the last post I don’t know what she told the female. This layout hints at involvements with money, a young man, uncertainties and supposedly advice from the Queen of Spades. I would really have wanted an affirmative card as the result to say without a doubt that yes, the psychic’s prediction will most likely happen in the way she said. I do not have that feeling. Far from it.

The meanings of the Book of Destiny deck are quite scant. I don’t think this is the best deck of cards to use in the 5 card Advice layout. Some decks just don’t work well in predefined positions in layouts.  It was fun to experiment, though.