By seaqueen January 28, 2015 15 card layout It's in the Cards Marthy Jones Magisches Lenormand

In Marthy Jones’ book called, “It’s in the Cards” there is an image of the 15 card layout on Page 8 which I will be using today. I am featuring the Magisches Lenormand since I have it on hand. Plus, I really like the defined imagery.

In the image below I have numbered the order of the cards which you lay after you have shuffled your deck. You can concentrate on a specific question or just see what the cards will show.  After I shuffled I randomly pulled a card from my deck and put the cards in the order face down. Then I turned over the center 3 cards first to study them.  You can also just count off 15 cards from your shuffled deck. Do whatever feels right to you.

The reading is for an unattached 41-year-old female who is wondering if she will meet a new man with possibility of steady relationship. 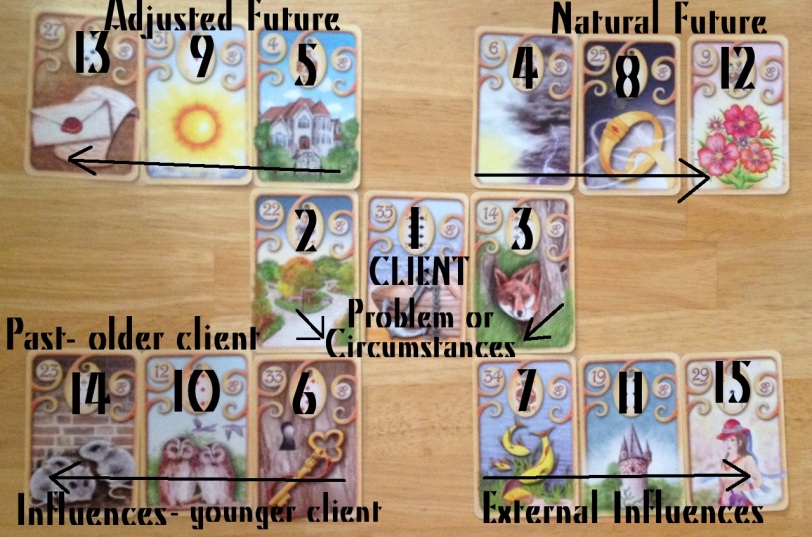 Card 1: The Anchor card in this spot represents the 41-year-old female. This card tells you she is stuck. It could also mean she is grounded in herself. If you take the work meaning for this card perhaps all she does is work. It’s important to keep the original question in mind and not get carried away with all kinds of different meanings on the cards.  Cards 2 and 3 (Path/Fox) will reveal her current situation. The female is at cross roads and carefully reviewing her options. Perhaps she is not very trusting because of something that happens at or through a work situation.

Cards 4, 8, 12 in the upper ring wing show the natural flow into the future if all remains as is with no effort on the female’s part to change things. We know she is thinking about making changes.  If this wing ends well, then the female should just continue doing what she is doing. If the wing does not end well, she has options in the upper left-wing on what she could do, provided that wing is positive in nature.

Clouds/Ring/Bouquet. The Fox card links to the Clouds card. This indicates her attitude is very cloudy about relationships. She doesn’t want to make a mistake. The dark side of the clouds face the Ring. This is never a good sign for commitments. She could get involved for the wrong reasons. The Bouquet card tells me the female will come of it smelling like a rose.

The Fox card also links to the Fish card in the lower right-wing (cards 7, 11, 15). This wing is all about external influences. Things which may not be in her control or things she does not want.  If you will notice the Lady card ends this wing. The Lady card is the female getting the reading.  Circumstances have put her in a very isolated situation. Part of this is because of (King of Diamond/Fox) a man who was really self-centered and hard to reach emotionally.  This man will continue to be an influence in her life during the span of this reading (probably 3-6 months) and most likely a separation of ways will follow.

The Path card links to the House card in the upper left-wing. This wing of cards (5, 9, 13) looks very promising and offers the female some advice on other options. A very warm-hearted man (King of Hearts/Sun) awaits her. She will receive news from him (Letter) which will cheer her up quite a bit.

The female may know this already and maybe that is why the Path card appeared as she is contemplating a decision.

In the lower left-wing, cards 6, 10, 14 are more contributing cards. Here you will find out how other people or factors play into helping the female make a decision. Looks like there are some meddlesome (Birds/Owls) individuals who would rather see her at their low-level (Mouse) than to move forward. These individuals are more interested in the break down of her happiness. Not very nice friends at all. She needs to be wary of these influences and do some damage control (Key) before it happens. Path card links to the Key card.

Did the 15 card layout answer her question?  I think she will meet a man (upper left wing) but she needs to finish up with an existing male shown in the lower right wing. Since she ends the wing and the cards here do represent something she might not want to experience it is clear that she will face these problems head on. Lady looks at Tower card and the separation will be to her benefit (Fish).