Ever wondered what’s really going on?

The 10 card What’s going on layout instructions are within the image. Just shuffle your deck of choice and lay the cards accordingly. have inserted the names of the Lenormand cards within the image which can be seen below. Maybe Santa will bring me a better camera. After all was said and done it dawned on me I could have used my iPhone camera. 🙂 The image of the Rider card is thanks to Apple’s built-in app Photo Booth.

I am using the Mystic Mauve Lenormand by Tarotlyn. I have chosen the 36 cards I like out of the 64 cards which were included in the mini deck. 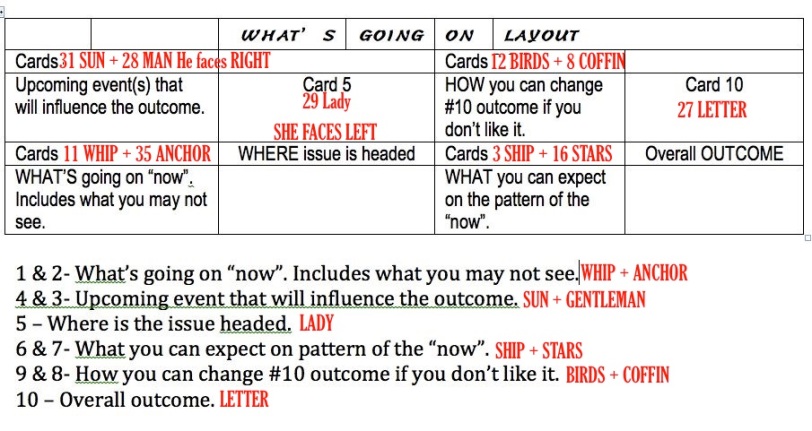 Background information: middle-aged female was separated from her husband a few months ago. She is feeling uncertain about her future. The female wants to know if they will reconcile their differences and get back together.

Whip/Anchor: What’s going on with the female consultant of the reading? Is there some situation she is not fully aware of or hasn’t recognized. For one thing these two cards show stress over her job. They also show arguments during the process of trying to work things out. Fairly common. She is aware that the disagreements lead to more disagreements without any progress.

Sun/Gentleman: Her husband is in a good place. He is happy although the Sun card is behind him which gives the impression he is not embracing his happiness.

LADY: This issue/situation is headed right back to the female. She is facing the Gentleman. This also means she is looking at her past. (Not all cartomancers will agree on this but that’s the way I view directions of people. Not all Lenormand decks will support this idea because the Significators could be facing forward.) It’s all up to her to go after him in whatever way she knows to save the marriage from divorce. This card does not imply she will succeed. She will have to deal with what’s coming up.

Note: when you do a reading you would have already scanned all the cards in all the positions before you start talking to your client. Writing this reading in a step by step process takes away from the natural flow which happens when reading cards.

Ship/Stars: What you can expect on the pattern of the “now” cards. What does this mean? Simply, what will evolve from the Whip/Anchor influence. We know the couple has been fighting and getting absolutely nowhere. The Anchor energy stays put. The Ship card shows movement or perhaps even travel. The Stars indicate moving forward as well and at the very least reaching out towards an outcome. The lady is wishing for a reconciliation. Will it happen though? Will they travel to a romantic area?

Birds/Coffin:  The Letter card in the outcome spot does suggest further conversations. It can also be paperwork like being legally served but there is no tower card in the previous spot to confirm this idea.  The last card can signify a legal agreement which some couples agree to if they stay together. Does she want to change the outcome? Not in this case. The duo card combination points to a dead end so it’s best she does nothing too outrageous. I like using the Birds card as a time card like within 2 days, weeks or months. It is two of something. It is also her pining process which will end (coffin).

I did draw another card for the outcome because just the Letter card is not enough of an answer.  The next card on the previously shuffled deck was the lady Rider. Three guesses what is on its way – looks like divorce papers. She can change her attitude or response after receiving this news but she cannot change (Birds/Coffin) the fact some paperwork is en route.

One thought on “Ever wondered what’s really going on?”