I like using the 21 card layout from Regina Russell’s Card Readers Handbook when a person wants a general forecast. I read my own playing cards using this layout and have for many decades.

If you follow Regina’s system you will know that this layout is actually the third step of a full reading session. The first step is the 15 card layout followed by the second step the 12 card layout and then the layout featured in today’s post. That is actually three readings in one session but it does provide in-depth information as each layout is a continuation of the previous one.

I have found that any of the layouts in the handbook can be done as stand alone readings. The ever popular 6 card Marriage spread is used to answer specific questions. I’ve written about the latter layout in the past. It’s found in the Card Readers Handbook on page 117 of the copy I have.

This is the first time I’ve studied the cards in this particular layout so as I study and investigate potentialities I also write this post.

The circled numbers which I put in my handbook is the order that the cards are laid out. 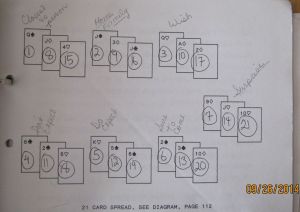 This layout from the Card Readers Handbook is copyright by Regina Russell.

CLOSEST TO YOU & HOME/FAMILY fan of cards

Today’s post will be very simple using only a few keywords just to give you an idea on how to read the cards in the designated positions (fans of three cards).

Closest to You 2♥Ace♥2♠: Here we find what is the most important set of circumstances around the 40-year-old female. She is definitely thinking about her home and her children. The 2♠ following the the heart card could pose some minor problems, though. When combined it shows a change of residence, however, the A♥ precedes it suggesting it may not be a “forced” issue to relocate. We should be able to get more information in the next fan of cards about her home/family.

The 2♠ combined with the K♥ and also the Q♦ (in the Do Expect spot not shown here). The 2♠ + K♥ indicates a male with whom the female was separated will be returning. Did this man move out already? Is it someone else?

Home/Family King♥3♥5♠: The male member of the family is returning (combined with 2♠). The K♥+3♥ is also showing a love affair. Oh dear, we didn’t want to see this but maybe that’s why the female’s home/children are on her mind and the possibility of relocation. The 5♠ loosely combined with the 2♠ suggests a divorce after a period of separation. I say it is a loose combination because the cards are not touching.

The handbook does confirm that 5♠ + A♥ is a move out of the family home. Again, this is a loose combination as the cards do not touch but most importantly the cards are not too far from each other. Also, the spots they fall in are hitting the mark.

If in fact the K♥ is having an affair it might end 5♠ even though a separation and change of residence is implicated.

So much for a brief explanation. 😆

The Wish 7♠ 7♥ Ace♣: Black, black, black. ♠ ♣ ♣ is not as bad as ♠ ♠ ♠. I can only imagine what the female’s wish was at the time the reading was requested (few days ago). I don’t know what it is and besides that I feel one’s inner secrets should remain silent. We have a setback. The 7♠ represents drugs and alcohol as well. We have another loose combination of 7♠ King♥ 3♥ suggesting a loved one is drinking/taking drugs on a steady basis. Since these three cards are not in the exact order as shown in the handbook the problems still exists because the 7♠ is the last card of the combination.

The 7♣ is a double whammy as there are two black 7’s intensifying the energy. It is an unpleasant combination with an argument most likely about legal issues (Ace♣). If we look further into the entire layout we can see 7♦ in the Surprise fan of cards. 7♦A♣7♠ means there is also a serious money issue.

Tip: when you are reading the cards you will be scanning all the cards and certain combinations should stand out. All that information should be in your head before you commence the reading. If you are not that experienced make some notes of all the combinations whether they are loose or not. That way the reading will flow better.  I am taking the trio of cards out of the context of the layout to write about them & will mention most combinations but not necessarily all of them.

Don’t Expect 5♥ 4♠ Queen♦: The first card can represent a female. It is also an offer or opportunity. From the 4♠ we see that the Q♦ will be feeling very tired and exhausted. This Queen might be a friend. If this is the unexpected fan of cards then one of her female friends will be experiencing some minor health setbacks due to some “feminine issues”. This Queen is closely tied to the 5♥. This 5 card represents the breast area. One thing I do want to mention is that 4♠ and A♣ does represent a hospital. The fan does not end in a ♠ so maybe all will be good for the Q♦.

Do Expect 8♥ Jack♥ 9♣: The female of the reading does have a close bond with a younger male belonging to the family who is at a distance from her right now. These three cards point to moral support. It could be this young man who will return into the female’s life since the 9♣ does suggest travel.

Sure to Come 6♠ 3♠ Queen♥: Another card suggesting the end of some situation or getting rid of a “bad” situation. Followed by another ♠ which depicts misunderstandings and confusion the female of the reading (represented by the Q♥) will have a lot on her plate for the next 6-8 months time frame. The fan of cards ends in a heart so she will endure and cope.

Surprise 6♦ 7♦ Jack♣: There are so many meanings for the 6♦. You really need to study the adjoining cards to make sure you select the most appropriate ones to fit the topic/theme of the fan of cards.

Look to the next card before deciding. The 7♦ talks about a substantial amount of money. When it is coupled with a court card it means some sort of publicity. The publicity can be something brought out into the open and made public. It is not necessarily that fame is involved. Ok, back to the 6♦ ‘s possible meanings. One simple prediction is that the J♣ is a customer service person in a computer (6♦) store and that would make him a “public” figure. 🙂

Remember that Ace♣ loosely combined with the 7♦ does suggest signing papers for a large sum of money. It could be a loan?

There certainly was a lot of information in this 21 card layout. I didn’t cover absolutely everything. I hope you found some useful tips or information on how to read the playing cards.