You were pretty sure all the cards were upright before you started to shuffle. After you laid out the cards in the layout of your choice you noticed one reversed card. Have you ever been tempted to read it? Most Lenormand cartomancers will not read reversals namely because they are “intended” to be read upright.

In my view, if you turn the card upright you are changing the energy which was established at the time of your shuffle. I suppose many do this with the Tarot deck as well. You might be surprised to discover valuable information from that card. Yes, it is a personal decision to follow the “teachings” that Lenormand cards are not read reversed. Exploring reversals is a good exercise. It’s all part of reading cards. Upright. Reversed. Side ways. Standing on your head 😆 . This post isn’t all about reversals it is about investigative cartomancy.

I did a three card layout earlier today to ask a specific question. It was a request from a professional man. Here is the question: “Who is undercutting my business by charging a lower fee for the same service?”  He does have a pretty good idea who it is but is not certain. This is a “who” question so we are looking for a person or quite possibly people (company or organization).

Is it an older couple (birds)? Is it a tall person (tall)? Is it a person or group affiliated within the same legal organization as the professional man (tower)? What about the reversed Fox? Who is it?

A person who is worried (birds) about the legal ramifications (tower) if he or she is caught (reversed fox).  Could be?

I tend to read the three card layout as the past, present and future.

The past shows this professional man is highly nervous (birds) because of this situation. He could be thinking about taking legal action (tower) against the person or people. The reversed Fox as the future card suggests the “who” will not be caught and the “who” will change his motives.

Neither of these interpretations answer the question. OK, let’s look at the center card as the theme which is the more common way in a 5 card layout. The Tower should represent the “who”. The Birds and reversed Fox should describe the “who”.

The “who” is a person who is hard to reach. Maybe he or she thinks they are the greatest thing since sliced bread. A lot of professionals in highly competitive fields feel they are #1 and should be #1 no matter how they conduct business. So far, we have established this person is most likely at the top of his field. He might run two businesses (birds). He might deal with stressed out (birds) people in his line of work. He may have incorporated good strategies (fox) in his line of work but doesn’t any more (reversed fox). Something has gone terribly wrong (fox) in his life and he is unable to regain control of his professional terrain (reversed fox). That would certainly narrow it down to a close colleague who feels threatened that the professional man will steal (fox) his business. And no, I can’t give a name. 😉

If you add the cards up they equal #9 The Bouquet – my guess is it is a woman with dark hair (Q♠) who is very good at what she does. Her outer personality is charming. She might even manage a beautification company which goes hand in hand with what the professional man is offering.

(blowing imaginary trumpet) and here she is. The Culprit.  Wasn’t that fun?    🙂 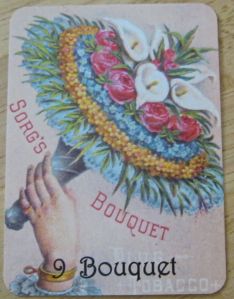