I have studied Regina Russell’s cartomancy system ever since she published her first handbook. I am always amazed at the results using her meanings which have a little flavour from Dr Leo Martello’s system.

Today’s question is for a male in his mid 50’s who is tiring of the job. He works long hours and would really like to secure a job with shorter hours but still work a full week. By week’s end he is physically exhausted.

In Regina’s handbook, she has a 6 card layout which she calls the Marriage Spread. In my experience, this layout is great for any question. It’s on page 118 in the earlier version of the handbook. Most of the content has not changed much over the decades. For more Readings just click Regina Russell’s name. The cards I’m using are from one of the antique Piatnik decks which I’m pretty sure is from the 1930’s according to my research.

I would like to demonstrate just how easy it is to read the cards in this informative layout. I’ll only use very brief meanings which I feel pertain to this question. 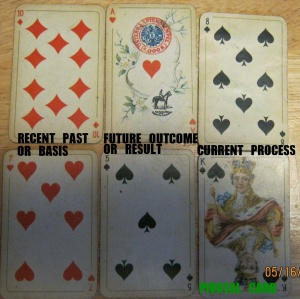 Ask a question Get an answer

First of all, there are 3 spades which lean towards a no answer. There is a spade both in the pivotal spot and as the result card. Right away you should know it will not be so easy for this man to change his job and fulfill his wishes.

10♦ – the big money card, can be a bank, airplane if combined with 10♣ which is not in the layout
7♥ – something repeated, a replacement, second chance ….

The way I want to read this duo of cards is that in the past the male has become gainfully employed in a field he worked in previously.

8♠ – visit to doctor or someone in medical field, research….
K♠ – might be the doctor, man in control, divorced or widowed, a boss….
The KING of SPADES in the bottom right hand corner of the layout is what I call the trigger influence or the “pivot card for the spread”. This man has something to do with the male’s job situation. He would be divorced (5♠ & K♠ )

These two cards suggest a few options. He could keep on researching for other work and deal with controlling men in authority. Another possible meaning is that he will need to get some doctoring which may push him out of the work he is currently doing. The 5♠ does represent the leg/thigh area so hopefully he doesn’t pull a muscle or have any injuries on his job.

A♥ – the home, family, change of residence, positive energy….
5♠ – an end, quitting, getting fired, responsibility. When combined with A♥ moving out of the family home and yes, the cards do fall together.

These two cards reveal the outcome. A♥ and 5♠ combined specifically means moving or leaving one’s residence. This is unlikely but who knows what happens to people when they are under too much stress. I think I would want to read the A♥ as his current job. My reason for this is because he spends more time there than actually at his home. Working 12-14 hours per day is tough on anyone. The final card does suggest he has a responsibility to his family (5♠ and A♥).

The King of Spades is the key in this Reading. Is it a doctor telling him to take it easy? Does this King represent the man getting the reading who possesses an old-fashioned work ethic common with the spades King? Is it a new employer? Lots of possibilities to think about. Could be all of them.  😉

There will be some changes coming over the next month or two and hopefully they are not due to any health reasons.