The Oracle of the Radiant Sun Astrology cards © 2002 by Caroline Smith and John Astrop is a perfect deck for those of you with some Astrological background. I work with Zodiac/Astrology wheel layouts quite often using various decks of cards.

Today’s post features the Sun Year Layout which consists of 12 cards in the 12 houses Aries through Pisces and the 13th card in the centre which is the Theme card (general yearly influence).

The great thing about doing this layout is that you can draw a further four cards for each month to give you weekly information. I would do this if the main card presents challenges. In other words, for the month (see top of 1st image) January 2015 the Loss card sits there. When an additional four cards are selected for this month you would be able to gain more weekly information as to what’s going on.

The Reading will commence with the month of May 2014 for female L. who has an October birthday Libra. The Theme card is the middle of the spread – Health. Let’s look at this card. Sun in Virgo.

The Health card not only represents one’s health but also everyday work. Sun in Virgo rules the sixth house of the Zodiac. (house 6 also rules small animals) The Theme card for female L highlights her physical well-being. It is quite possible she will at some point during the Reading forecast adopt a new health related regime. This card also means that female L may be involved with finely detailed aspects of her job such as more organization, cataloguing or editing content (paperwork). One’s health is affected by one’s every day work. If you are overworked the stress can affect your general health. It affects sleep, nutrition and attitude.  Someone else’s health could be a worry.

I won’t go through the entire Reading but will select certain months to write about which I think are of interest.

MONTH OF MAY:  ENTHUSIASM

The month of May should be super. As we can see the Romance card falls in April. There is a very good chance female L may be interested in seeing someone. I’m not sure if she met anyone at the time of writing this post but by the sounds of her last email she was in a great mood. The Enthusiasm card is represented by Sun in Sagittarius. Often there is a connection to foreign people or places. Sagittarius also rules education/knowledge which could turn out to be some additional training connected to L’s job.  The general energy of May will be up lifting. 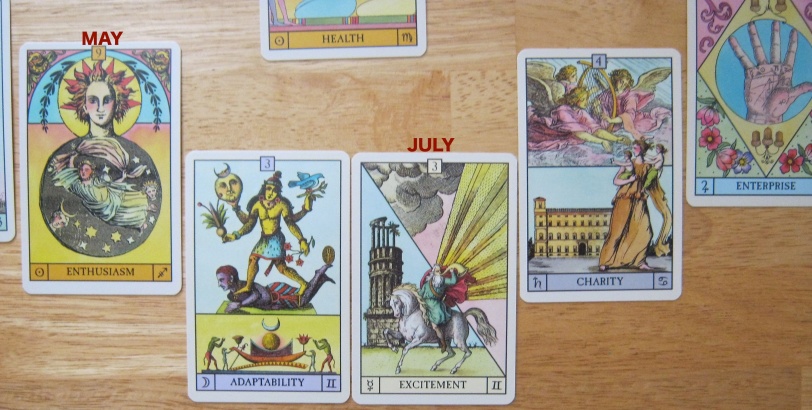 What could possibly be the reason for the Excitement card? It looks like the month of July will be very busy. Mercury rules communication. This is a very social card promising a busy social calendar. The downsize of the Mercury in Gemini is female L may change her mind at the snap of a finger. 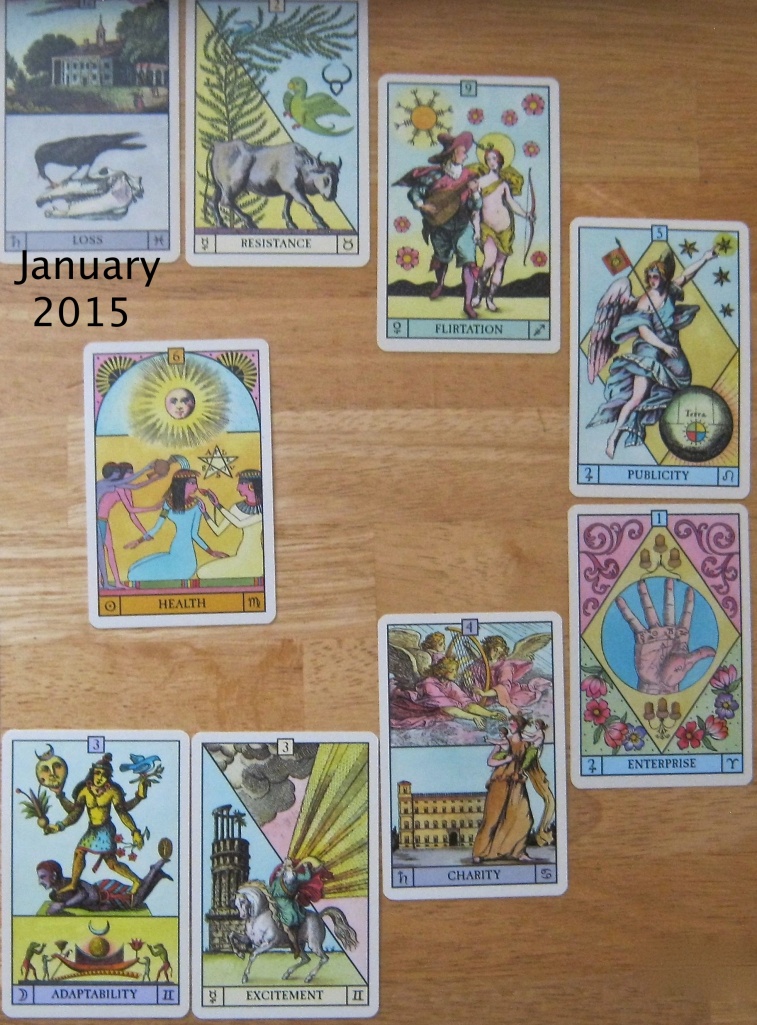 The month of January 2015 is represented by the Loss card Saturn in Pisces. Often this card is a very real experience which involves the person directly. The situation could involve a loved one. Connections with hospitals are quite possible. I have selected four additional cards for this month because of the nature of the Loss card. Each card will represent one week in order of cards drawn from the pile which was set aside after the layout was completed.

4 weekly cards for the month of January 2015

The weekly cards should shed some light on the Loss card which is the overall influence for the month of January.

Week 1: Inspiration. Mercury in Pisces. This card reveals female L already knows many of the answers which appear this month. She may be refusing to face up to it. This is a card of excuses.
Week 2: *Extremism*  Mercury in Scorpio. The energy of this card is very powerful. Often this card suggests news of a death. There will be some drastic unfoldment which will affect female L very deeply.
Week 3: Optimism. Moon in Sagittarius. This card indicates that a long trip or travel is necessary. There will be a reunion with people from L’s past.
Week 4: Egotism. Mars in Leo. This card represents L’ s overall attitude. She will be a bit more assertive than usual. She may have to take the role of leadership.

Studying the four weekly cards there is a strong indication a situation will materialize which will test female L. Since the Loss card does suggest the “loss” of someone or some situation which is very close to female L the weekly cards confirm this especially in week 2 of January.  The Theme card needs to be factored in when reading these cards as well. There is a strong indication that someone’s health will be of concern.

In the March 2015 spot (far left of layout above the April 2014 card) the Acquisition card Sun in Taurus suggests female L will come into some money or at the very least something of value. This card also shows a minor dispute over possessions.

The Oracle of the Radiant Sun astrology cards can also answer specific questions. You would still lay out the Zodiac wheel but only turn up cards which are related to the questions.  Here is an example:  –>LINK.