Asking the Tarot if he/she will return 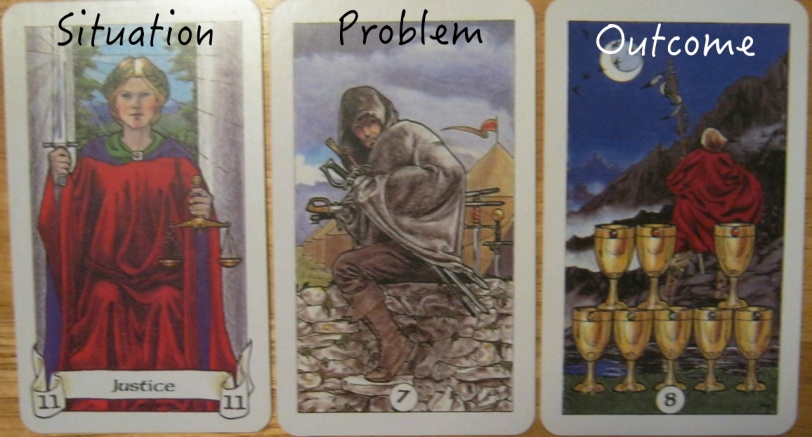 The million dollar question: Will he or she come back to me?

I have assigned meanings for the three positions in this layout which you can see in the above image.

This card should reveal some information around the question. The Justice card is about right and wrong but it is also about impartial decisions which do not factor in one’s emotional state. Many times a person will leave a relationship not providing any reason. They just disappear. Often this is baffling because the other person involved thought things were going well. Did he or she think it was the right thing to do? We don’t know what kind of relationship this is as there is little background offered. Clients don’t always provide details until after the Reading is completed.

Let’s assume it was a relatively “normal” connection at this point of the analysis.

The problem is that this relationship was going in the wrong direction. One person was giving and the other person was taking…taking and taking. Something is off-balance. This is indicated by the tipped scales in the Justice card. Also, this card represents the “taking off” of the person which is often done intellectually/emotionally first followed with the physical leaving.

When two people are in a relationship they have a responsibility to each other and to the relationship. Sure, sometimes it feels like you are giving more to your partner but it should balance out within a short period of time. Even when there are challenges they don’t last forever. Changes come eventually and the couple goes to another octave of the relationship. Growing pains are unsettling.

There is an element of deception within this card. Everything was not above-board. Even if you tell the client your findings so far you may get a nod and that’s it. Other times the person will burst out in rage. Sometimes their emotions get so intense they cry.

Will he or she come back?  It is highly unlikely. Even if the person had no real reason to leave they did leave and have no intention on returning. The person who has gone off to pursue other things in his/her life has some inner issues. Life the way it was had little meaning for him/her.  This makes it tough for the person left behind.  Not all people can accept such a situation without beating themselves up thinking it was something they did or did not do.

At this point of the Reading it is very important to offer your client a few minutes to compose themselves. Always ask if there is any other questions about the Reading. You may have to do another layout if the person wants more information. Lastly, you can end the Reading by folding the cards and putting them away. This action closes the session.