about Lenormand cartomancy including the Tower card. 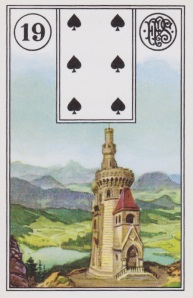 If you don’t want to read the playing card insets then you should consider buying a deck which doesn’t have them.

Little playing card glyphs like 6♠ won’t throw you off as much as seeing the complete card.

To make your life easier while embarking on the Lenormand cards journey don’t try to hard to fit the playing cards into your Lenormand interpretation. I’m not saying the playing cards aren’t important. They are part of the Lenormand pattern of cartomancy. There are connections to game playing and also to fortune-telling. There is a way to use both cartomancy systems  but I feel this is more for the advanced Cartomancer, one who has learned to stop making connections to the Tarot cards.

You can do whatever you want when reading the Lenormand cards. You can follow “tradition” or you can follow your “intuition” or you can follow someone’s book/ on line teachings. I think you should develop your own style by memorizing a few meanings, train yourself how to read combinations and understand some layouts. Of course, there are techniques that go along with that like knighting, mirroring, reading Houses, etc. By going slow & steady you will become a very good Reader of Lenormand cards.  Joining groups and forums is helpful but you need to remember that everyone comes from the different level of understanding. Originally, I was rooted in Lenormand tradition but I feel there is ample room for experimentation.

In a Reading, the Tower card announces several possibilities:

The Tower card can take on a different meaning when combined with other cards but its “core spirit” remains in tact. Depending on which deck you are using you might get a different feeling from the image. You are not always in the same mood when you read the cards and this can affect the summaries you come up with. An individual’s personality has some bearing on how they read the cards. Some cartomancers can recognize patterns easier than others while other cartomancers can’t see the forest for the trees. Most cartomancers see something while others just cannot connect the dots (meanings). If you are struggling to learn the Lenormand cards then perhaps you are just trying too hard. Maybe you are getting bombarded with so many different opinions on how you should read the cards that it is all starting to sound like some foreign language you don’t understand.

Keep your process of learning simple because the Lenormand cards are a simple system of fortune-telling. Just remember that the images in the cards mostly reflect the meaning of the card. The images are a Universal language which are understood globally. There would only be a few image symbols which would provoke different meanings from certain parts of the world.

Have fun learning to colour the Lenormand cards!

2 thoughts on “about Lenormand cartomancy including the Tower card.”