I have several decks of Naipes from various countries like Spain and Mexico. I haven’t quite gotten into the habit of doing layouts with these types of cards even though I am quite fond of them. 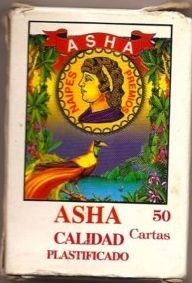 One very beautiful deck is the Baraja Ibero Americana deck.  My deck has 40 cards with the 8 and 9 missing which is often not used. These cards are gorgeous and made me regress back into time when I looked at them.

For historical information click the following link —-> The World of Playing Cards.

and for more images of the Baraja Ibero Americana deck click ——>HERE.

You can see all the meanings at Serena’s Guide to Divination. I think these assigned meanings are fairly common to the Naipes. In my research I have seen similar card meanings used in a countless number of websites and blogs. The Naipes can be read in reversed positions. They are combined with other cards in the deck to tell a story.

Examples of a basic combination: you link the card meanings the same way as you would with the Lenormand cards and any other Sibilla style fortune-telling cards.

The meaning of these four cards suggest news of a sickness/illness connected to the home probably a relative. Another meaning can be that a doctor needs to make a house call (rarity these days) due to someone’s illness.

Using the same three cards as in the previous example and adding a different court card.

We know the meanings of three of these cards. #10 (Jack) of cups can be a sister, mother, female friend or even a lover. There are no Queens in the Naipes. #11 is similar to the Knight in the Tarot.

A trip is planned around some legal papers connected to the home by a female belonging to the family. Another interpretation could be a sick friend is planning to visit your home.

One last example since I already uploaded the image. 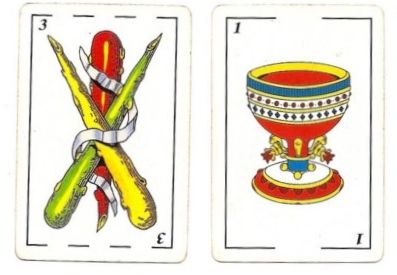 The Ace of Cups is the home/family. The 3 of Wands is a package or some kind of container among some other meanings like workplace/religion. The combination is pretty obvious. A package comes to the house. It can also be working from one’s home. It can be a place of worship. And so on….

If you have a spare and inexpensive deck of Naipes write down a few key meanings right on the cards until you get used to some of the meanings. The minor cards 2 – 7 and  8 &9 if you use them, do not have scenes on them to help you out so the only way you will know what they mean is if you memorize the meanings.

Choose two or three meanings which are different from each other and that do not say the same thing. In the example above the 2 of Swords can be a legal document or illness as well as a few other meanings. If you find another card suggesting legal document you should only use that meaning once so that “legal document” is represented in the deck. Reversed meanings are not used often. By writing key words on the cards your subconscious will connect the dots when you use a deck with no written meanings on them.

It takes a certain amount of commitment to learn a new system. Doing any kind of cartomancy study half way will just leave confusing thoughts on the system. Full understanding takes time to learn.

As with any cartomancy system there will be variations with the interpretations of the individual cards. Each country sees the cards with their own unique views. It’s just like the Lenormand cards there is the German, French, Italian and Hungarian version but not limited to those either.