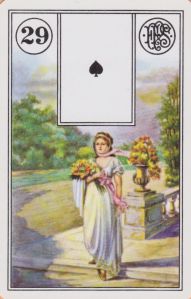 The cards around the Lady will describe her personality, what is on her mind at the current time and potential situations she is about to embark on.

The traditional meaning of the Ace of Spades certainly does not match the indications of the Lady card. I have read at least a dozen vintage Cartomancy books and have found the following meanings: death, great worry, large town/institution, important decision.

The cards around the Gentleman will describe his personality, what is on his mind at the current time and potential situations he is about to embark on.

The older Cartomancy meaning of the Ace of Hearts is mostly love, family or home. This meaning could apply to the Gentleman if he is in pursuit of love at the time of the reading. I mean serious love not just a fly by night affair. 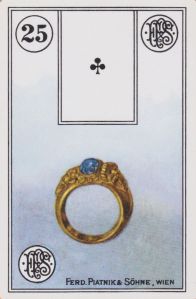 The Lenormand Ring card represents unity between things and people. It is a card of continuous cycles. Here we find commitments, agreements and smooth negotiations.

The cards surrounding the Ring card will reveal what type of commitments or agreements are to take place. In the past spots of a layout you can determine the same information. The difference between analyzing the Ring card in the past and the future is that you cannot warn the client of events which already occurred in the past. However, you can provide guidance for situations about to materialize especially if there are negative neighbouring cards. This guidance can be most helpful to the client.

In those same dozen or so vintage Cartomancy books I researched the meaning of the Ace of Clubs is often a letter or legal document.  Too bad there are so many cartomancy systems on the playing cards unlike the Tarot whereby no matter how many different authors there are the essence of the Tarot’s meanings are pretty much the same.

The Lenormand Sun card promises happiness. This is the best card to grant you an affirmative answer when asking questions.

The cards surrounding the Lenormand Sun card will reveal what degree of positivity the client will experience. This card is very powerful and it will take an equally strong negative card to negate some of it’s power.  It is a good card to find as an answer or as a last card in a row or column of a layout.  When falling in the past you can determine what areas were touched by the Sun’s warmth or perhaps burned by it.

If you decide to read the playing card insets here are a few suggestions:

1) find a system of meanings and stick to them. The more simple the better. The more consistent the better. Your main priority will be to read the Lenormand meanings & to use the playing card inset’s meanings as additional spicing.

2) read only the Court cards but remember not to read them like the Tarot courts. There is a difference.

4) assign your own keywords to the playing card insets and if your own system works – use it.

5) or you can read the playing cards whenever you get stumped on the Lenormand.

Finally, it’s probably best not to mix 2 different Cartomancy systems unless you really, really have a thorough understanding of the Lenormand or the playing card insets or both.

Like the old saying, “too many chef’s spoil the soup” or something like that.  Too many Cartomancy systems spoil the reading.