Even though I use the multi-level meanings of these cards at different times I get the same feeling from the FOX card as I do with SNAKE.

I’ll use an example taken from a Lenormand full board reading which you can see below. 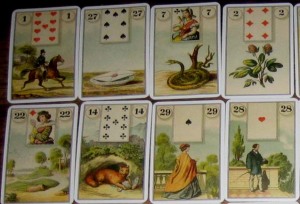 FOX is behind the LADY and SNAKE is above her.  Do you suppose she is surrounded by some deception involving the GENTLEMAN who is ahead of her in the near future spot?

Obviously the RIDER has delivered some news (LETTER) in the very recent past to this LADY.  This event is on the LADY’s mind at the current time. You can gather that a decision was involved (PATH) which turned out to be somewhat underhanded.  Whatever happened in the past the appearance of FOX and SNAKE was not an enjoyable experience with the LADY.

It looks like someone is lying to the LADY or she found out about an sneaky motive?  Maybe she is lying to herself and pretending these circumstances don’t exist.  Is the LADY playing a mind game with the GENTLEMAN?

There are lots of angles to these cards.  Interestingly, the CLOVER sits above the GENTLEMAN.  Could he have had a brief temptation with the SNAKE female?  It is highly possible but the fact that CLOVER is a card of speed it would be just a passing thing, like a few hours conversation in a bar or on the telephone.

This LADY will talk to the GENTLEMAN or see him in person within a very short time because these two cards are side by side.  What they will discuss will be the outcome of this previous/current situation.

Here are all the cards in the two columns which the LADY and GENTLEMAN appear in. Looks like there might be a parting of ways (TOWER)  or dissolving of the friendship (DOG) which the LADY is not fully aware (BOOK) of at the time.  Her hopes and wishes (STARS)  surrounding the GENTLEMAN will bring her much disappointment.

How would you read the cards below?