“Tarot of the Masters”  READING

The question posed is about the development of the Tarot Career of the creator of the Tarot of the Masters deck, James Ricklef.  I think that the mini Celtic cross will provide a short term answer and describe influences that can manifest over the next 3 months or so.

I do not think this layout will give a long range reading like the full 10 card Celtic cross.  Even if all the 10 cards were used the time frame is generally 6-8 months. If the Ace of Pentacles (a season card) were to appear, it would indicate the fall season of 2009.  In that case the reading can take up to a year to manifest.  Aces are also a starting point.

There are no Aces in this layout.  Does this mean there is no time frame involved?  My feeling on this is the starting points have already begun which involve the Cups and Wands suit cards. Cups and Wands amplify the energies belonging to these suits.  There is a lot of intellectual passion within James. There are no swords or pentacles within these 6 cards. It is obvious the rewards will come with minimal hardships.

The reading I will do is for learning purposes and I will interpret the imagery of the cards in relation to the general question.  I will try and avoid the traditional meanings of the cards up to a point.  It will be interesting to see how this reading unfolds.

Starting with Card 1, the 2 of wands -state of condition or emotional focus.

In the image of the card we see 2 wrestlers. What I find interesting in this card is the top of the head of one of the wrestlers.  A grey circle-subconscious knowledge. My feeling on this scene is this circle representing the head is an inner goal which will require some effort to maintain or balance.

If you really look at this card you can see the silhouette of a third being not fully formed in the center.  This form is new thoughts and ideas regarding James’ career direction.

He wants to move ahead and needs to open up the opportunities dictated to him by his gut feelings.  There is no room for doubt, now.

The crossing card is read upright.  It reveals the type of energy surrounding James throughout his process for the next 3 or 4 months.  Here we have a positive Wand card.  Will this card hinder or help James? 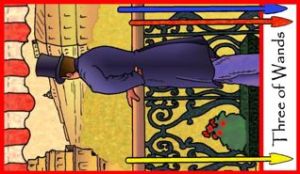 The image in this card portrays control.  A finely dressed gentleman who has had success in the past ponders over his next move.  The top hat indicates expanded ideas which will be explored during the duration of this reading.  A very good influence  to have as the crossing card.

The personality of the King of Cups might be suited to James.  I am not certain at this point. The imagery gives off a very serene and contemplative mood.  No doubt James knows his craft, he is an experienced and practiced man who has been given the gift of emotional vision.

The tiny little plant in the vase/cup on the right side of the card indicates the growing process of finding equilibrium between intellect and intuition.

I think it is time to act on some of the desires that come from this ponderous state.  We can see in the next card, something is still ‘missing’.

The next card is very somber looking giving the feeling of ‘is that all there is’.  The three cups on the table with very little liquid in them, most likely red wine 🙂 have altered this woman’s reality.  What she sees is a cup mid air and is certainly in no rush to grab it.  Who would trade a coffee cup for a glass of fine wine.

This image tells me that James is waiting but is not certain what he is waiting for.  Maybe he needs to let some more time pass before he makes his next move or to implement the new ideas he has.

The energy of this card is stable but boring. 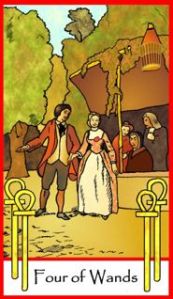 A union of sorts is coming onto James’ path. This can be a partnership with just the right balance.  In relation to the question, the career will go into a direction where he will partner up with another individual.  It can be a lady who is not known to him at this time.  Someone who shares his emotional space.

Traditionally, the 4 of Wands is a card of celebration.  The wait or plateau period happening currently will lead to success.  There is evidence of a warm welcome to his ideas and choices.

James will be surprised ( 2-4’s in layout) at the turn of events which lead to this accomplishment.

Card 6- Six of Cups-immediate future, situation that needs to be addressed prior to the materialization of card 5.

This is the most important card to analyze.  In order to reap the rewards of the previous card, James should look back to the road he has travelled.  Has he put an idea/project on the shelf to simmer until the time is right?

I really like the image in this card.  It reminds me of how we have forgotten to get excited like a couple of kids.  The lilies speak of all that is pure.

James will make a discovery by taking a trip to a place which holds many memories.  Here he will ‘snap’ out of the 4 of cups card and have a renewed emotional excitement.

A change of residence is a strong possibility.

The reading I have done illustrates some of the  possibilities when interpreting the “Tarot of the Masters”  deck.

The card meanings are in the eyes of the beholder. Seaqueen’s perception.

Images of cards reproduced with the permission of James Ricklef.