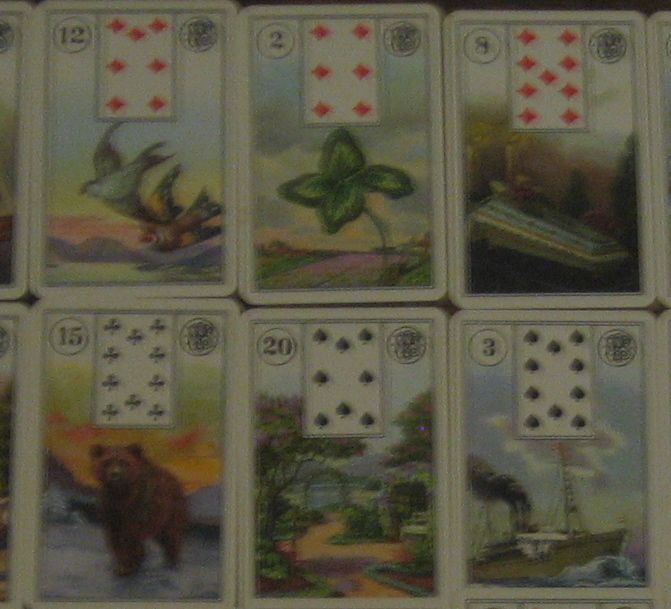 The image above is part of a 36 full board reading.  There are many ways to read the Lenormand cards in this type of layout. One easier way is to locate ‘theme’ cards and use them as a focus.  Let’s suppose you wanted to know how the CLOVER card would bring some luck or a short term situation.  When you read the cards immediately surrounding the CLOVER card it is a good idea to follow some simple steps.

There are 5 cards surrounding CLOVER.  These 5 cards should all tell a story around the focal card the CLOVER card.  Will they all tie in?  At this point it is unknown but as I take each combination the prediction should become more clear.

2 CLOVER– this card is one of rapidness, an influence not staying with a person or situation for a great length of time, it suggests an element of luck or uplifting energy, traditionally it is 3-4 days and possibly a bit longer if the adjoining cards are ones of resistance

One of the meanings of birds is grief.  When you use this interpretation then the grief will  be of a short duration.

One of the meanings of bear which I like to use is either power or a significant male.  Coupled with clover this duo can mean temporary good times are caused by a male.

The first card often means a group of people.  In combination with clover it can point to having fun with a circle of friends.

Many readers interpret ship to mean travel.  When combined this duo can suggest last minute travel or enjoyment.

Coffin can be read as an ending.  Joined by the clover the ending could be amicable or surprisingly well.  However, the card next to the coffin will actually reveal more.  Initially the ending can be a superficial nice parting of ways until the emotions kick in.

Here comes the part where the blending could be a challenge. We have determined there could be a possible separation or at least a situation where there is some sort of division.  The CLOVER and SHIP combo meaning doesn’t fit in very well and can be an aspect or contributing factor to the entire theme.  CLOVER and GARDEN points to a pleasant experience as well and so does the BEAR combo.

Since we are targeting the CLOVER card in this theme it is important to stay on track.  Of course, there are a multitude of other meanings when these cards are read horizontally, vertically and diagonally but if we did that it would only complicate the one simple theme around CLOVER.

Ok so let’s complicate this a little more.

-a powerful male surrounded by many people plans to travel

-grief caused by a powerful male

-an ending is followed by travel

Judging  by the other combination meanings there is definitely a significant male involved, some sort of sadness and an ending.  The ship  could be read as ‘moving on’ or flowing out of the picture.  The group of people (GARDEN) might even be certain friends being instrumental in this ending as in the male chooses his friendships over and above everything else.

Is the CLOVER card a luck card in this example?  Not really.