I received a message from a client who was recently shocked by some news she received from her employer.  Without telling me much details about what was going on she asked me do a short reading to see what the cards revealed.  I decided to use the Mystical Lenormand to answer her question.  I chose the  3 cards below.  Her question was whether this work change would benefit her.

I really like the art on this card.  The snake comes across as being regal.  Notice the golden egg.  Something will be hatched soon.  The news my client received is contained within this egg.  The protective energy of the snake can be misinterpreted as deceptive.  It is shielding or hiding the golden egg. In the background we can see the sun and moon indicating Karmic balance. In the upper right hand corner is the glyph for Scorpio- the stinging news.

The man in the image has a big club and a whip.  The client’s experience is like getting an emotional beating from the news she just received.  You will notice several religious symbols in the background suggesting faith is under scrutiny.  I think this card is portrayed in a rather spooky manner with the bat flying by.  There are many wonderful symbols you can study in this card.  It is a very emotional depiction.  Probably the client feels like someone just dropped a bomb on her.  The Whip card is all about being forced or coerced into a situation.  It suggests being ticked off and ready to fight or argue. 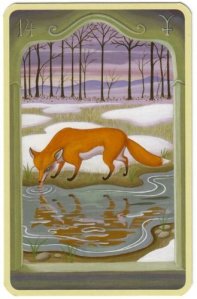 A wonderful image of a fox.  Look at him taking a drink of water.  He looks after himself even though he has a bad reputation. The reflection of the fox in the pond suggests emotional duality.  A type of deception.  It looks like the snow is melting in the background which points to more information coming to the client.  How will the client benefit from this news with the Fox being the outcome card?  I feel that the fox is preparing for an attack and that is why he needs to replenish himself with the water.  This card is a warning for the client.  She is dealing with an unscrupulous situation or person.  The client could empower herself by using the Fox energy to fight against the news.

Often the Fox card is read to represent work not necessarily the job per se.  It means to work at something or to work something out.  As a solution card, I think the client will need to makes changes. She should  explore the opportunities which lay beyond the trees.  The mountains suggest there is hope beyond this current situation.

The Fox does not kill for fun – it kills out of need. This card means that even if she finds herself in the midst of someone else’s underhanded activities it is part of working for a corporation. When I say underhanded I mean usually changes come without warning or preparation.  And yes it sure feels underhanded when it happens.