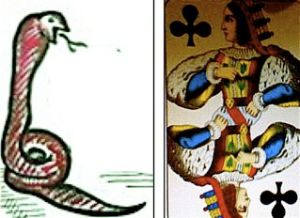 Who would be afraid of such a cute Snake?

The Snake card is one of my more interesting cards that I enjoy interpreting because of the various levels of meanings.  Not all Lenormand decks have the regular card insets.

#7 The Queen of Clubs is associated with the symbol of the Snake.  It all depends on your own particular perception of what a snake means to you.  Do you consider it evil?  I tend to use both the positive and negative meanings of the snake.  Initially,  I do not see the Queen of Clubs to be someone that you should fear, that would most likely be the Queen of Spades since she has a reputation of being someone that you should not provoke.

When I see the Snake card in my own reading, I use it to represent my daughter and the activities around her.  You will have to decide for yourself what works for you but it is important to have some sort of system to follow.  It does not have to be the traditional way, either.

In the image below you can see the Snake card belonging to the Petit Astro-Mythological Lenormand. The Queen of Clubs is depicted as a “kind, generous, carefree and obliging woman”.  In the negative aspect of this card she is seen as a rival or representing distrust (which is in keeping with the snake). 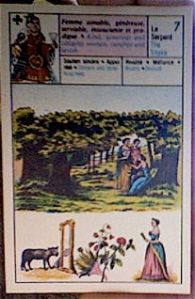 This card has a pink inset  and this means it is considered a positive card according to the little booklet that came with the deck.  The main scene on this card shows an apple orchard.  Here we see three females called the Hesperides. They are suppose to guard the golden apples.

Apples on trees have had a long time association with temptations –  look what happened to Eve in the garden of Eden.  I can see why the “snake” is attributed to this card.

In the lower right hand of the card stands a fine looking lady with a mirror. Mirrors can represent vanity, which is also one of the meanings of “snake” particularly in Chinese Astrology.

On the other side of the card is a full length mirror.  At first I thought it was a calf standing in front of it  🙂   and after doing some further research the animal is said to be a panther.   The panther is an intelligent but ferocious animal.  The snake is similar in personality.

One of the meanings of the SNAKE card is intelligence.  (to outsmart, outmaneuver)

Queen of Clubs- This queen usually represents a relative, co-worker or casual business acquaintance. When she falls near negative cards the suggested meanings of deceit & treachery are assigned to her.  She will be highly jealous and strike with venom.   It is not a good idea to enter a confrontation with her – you will lose.

On the other hand, if surrounded by positive cards she will be someone that will give you intellectual support.  If you are a male, the Snake card can remain a platonic girl friend even after you have experienced romantic intimacy.

Try to experiment with this card to get a feel of the essence contained within.  Follow your own gut feelings.