Ace of Diamonds- the Sun 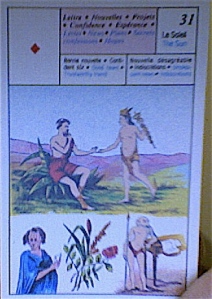 Our scene shows Mercury picking up a letter from Harpocrates who coincidentally is the transformed Egyptian new born Sun, a child called Horus. Horus’s parents are Isis and Osiris. Now this is where it gets confusing because Horus could also be the man with the falcon’s head whose left eye was injured during his fight with his uncle Seth who murdered Osiris, his father? And this make Horus the brother of Anubis. ———>

Thus the name of the card. The meanings of letter, news, plans, hopes and secrets are linked to the 2 characters in the image. The adult Horus had the power to overcome darkness and his strength was in his silence.

In the lower left side of the card we see Argus reading the letter. In the image it looks like the face is full of measles so it is could be the giant with a hundred eyes. But so the story is in keeping with Jason, it can be the builder of the ship Argo used in the quest for the Golden Fleece. Argus belonged to the Argonauts- a group of Jason’s heroes. This ship is seen in the Ace of Clubs.

In the lower right side of the card stands Anubis guarding papers/letters. It is the jackal headed god in Egyptian mythology who is associated with the afterlife. Not sure why Anubis is here unless it is because he embalmed the dead body of Osiris which would make him the older sibling of Horus (the one giving Mercury the letter). So the story goes- Anubis received Osiris’s organs as a gift.

Thus the re-birthing and rejuvenation suggestion of this card.

back to HOME page