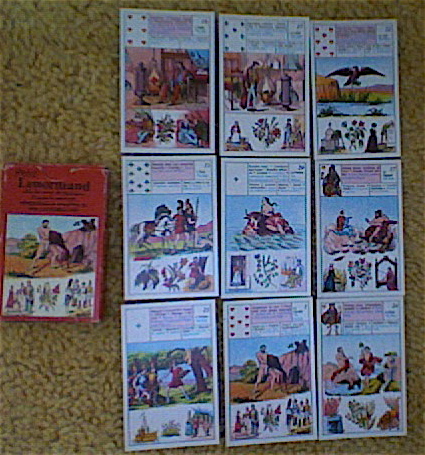 The block of 9 layout is quite diverse.  You can designate many meanings to the rows and columns.  I find this deck fantastic to work with and only wish I remember all the characters in the Mythology depicted in the cards.

Each card has a standard playing card inset in the top left hand corner. Here lies the general meaning and the number of the card.  Also, 2 special meanings -one positive & one negative and this applies to it’s combination with the lady or gentleman.  There is a unique flower/plant in the lower half of all the cards. Apparently Madame Lenormand was very knowledgeable in botany .  There  are several prophetic scenes on the lower half of each card (about 3/4 of it) which are part of the Grand Lenormand deck (54 cards). The cards are divided into two shadings.  The pink is a beneficial card and the white is more negative.

The card representing the lady (center) is white.  Interestingly the meaning is also negative in nature and I think this is due to the influence of the Ace of Spades.   This is the only deck that is somewhat in keeping with some of the traditional meaning of the standard playing (skat) cards and many of the Tarot minors.

The  writing on these cards is so tiny I can hardly make out what is written let alone read the French.

THE LAYOUT- when you first look at the image above you will notice a predominance of pink which means the influences tend to be more positive in nature.  The image(s) are not very clear because in order for them to fit into this space I had to downsize the entire picture.

SUMMARY- In the recent past this female had dealing with a work situation that has caused her some confusion and worry.  She may have gotten some promising news in the recent weeks.

15-success in a risky venture, pluck (a type of sudden removal) 29. a meeting, embarrassing quarrel (or just the female in question)  17. kind hearted woman

SUMMARY- the female is in the midst of some situation that could go either way.  She will be connecting with another female very soon to discuss this.

BOTTOM ROW represents the FUTURE – 25. The Ring 1. The Cavalier 24. The Heart

SUMMARY- the cards look good for the future and there will be a connection with a male which leads to this happiness.

There are probably another couple of dozen interpretations with these cards using the “other” Lenormand meanings that are given to these exact same cards which are not really written on the individual cards.

back to HOME page