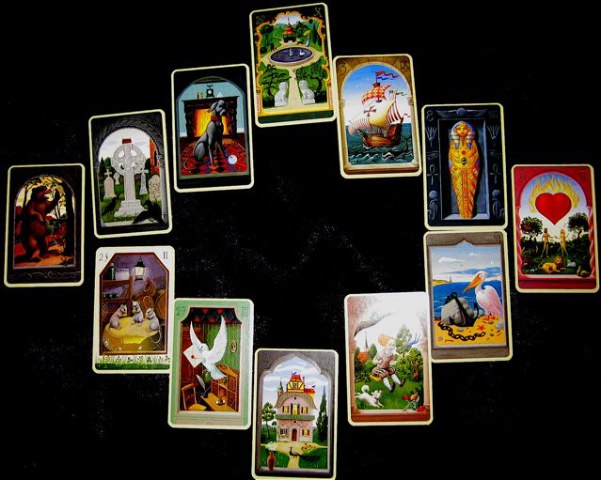 see the NEW VERSION shown without the egg tempera technique.

In the image you see the cards assigned to the 12 Astrological Houses. Not shown- Another 12 cards that represent the Astrological signs and the remaining 12 cards depict the planetary ruler of the Signs & Houses. A wealth of information is contained within these glyphs over and above the suggested meanings for each house.

If you take out the following cards and place them in a circular pattern as above (more like horizontal oval) you can become acquainted with their associations in the Astrological wheel.

House of the self, personality, the face that you present to the public, your physical constitution, your body.

The image of a brown bear trying to get some honey from the beehive attached to the tree. Did you notice the insect/rather a bug, on the bottom right of the card.

The suggested meanings of BEAR is power, force & strength. The father or male ruler of the family is depicted by this card as well. Within this card are secondary negative keywords such as emergency, abuse, fear, superiority and intimidation. I’ve had certain people disagree with me on the secondary keywords but I feel when power is used to gain control over someone weaker for selfish purposes- that is abuse, and that person will be in a fear mode.

If you were to interfere with BEAR while he is trying to feed himself he will take a swing at you and the force behind that paw will send you into orbit.

As a representative of the 1st house this card is associated with the vigor of your body. Many people present themselves to be more superior than they really are because they do not want others to know their weaknesses.

House of finances, what you value, your worth, assets & liabilities.

The suggested meanings of MOUSE are loss, deterioration, eating away, eroding. Mice will eat just about anything. They are sexually active and have a musky odor- thus the suggested meaning of personal hygiene. Sewers, smelly things. Something stinks.

Our three mice are having a party in the image. A good amount of the cheese is missing. The lantern in the background is burning brightly.

In the 2nd house connections, the loss of assets or things you value is important. Sometimes we see our financial problems on paper and it still doesn’t register and it gets out of hand. The next thing we know the bills multiply as the mice do, and rapidly.

Some meanings for the LETTER card are news, information, replies, applications, messages etc and it can be about anything. The card next to it will tell what it is.

Our beautiful bird has a white envelope with a red seal in it’s beak. The content of the envelope holds an important message or document. Because the bird is indoors and not outside, there will be some news that may be restricting in nature.

The connections all fit in relation to the Letter belonging to the 3rd house. It’s almost as if the bird is saying, “come and get it”. The news has arrived.

If you continue studying in a similar fashion you will achieve a comfort level and relationship with the cards.

10 thoughts on “Astro House Associations of the Mystical Lenormand- houses 1,2,3”