Using the traditional Celtic cross with the modern Gipsy cards.

1-what type of energy surrounds you- LORD

In the previous post of the Art deco Wahrsagekarten category I stated that “we see a well dressed man on the right, symbol of standing in society, on the left side is a servant/messenger or personal aide. The colors in the background are bright yellow/reddish orange..optimistic feeling- the servant is waiting for instructions or might be informing the “lord” of his duties for the day.”

Since I shuffled the cards with no conscious question in mind, the lord card depicts what I am in the midst of. I do not identify with the lord in the picture, more like the servant. The reason for this is that I am somewhat of an errand person right now for other family members. I am not waiting for instructions because I don’t really want them but-they are given, lol.

2-what helps or hinders you- PROFIT

This is an interesting card and I can’t see it being a hindrance. Profit is gain, even though the picture shows a man placing a bet- gambling on something. There is a field in the background but it is hard to tell if it is a racetrack or an actual sporting event. Does this mean that I will gain somehow because of the “servant” duties??? Can’t see that happening.

Well, what the heck is this card all about. The picture looks like something from a scene in a 1940’s movie -OK how modern is that. The visual message is betrayal and being caught. I don’t think it is a literal meaning in my case but it can point to being forced to do something against your Will- even if you are guilty or not. The only betrayal I can think of is and this is such a long shot but betrayal of good health of a family member….makes sense to me. Take for example the Tarot- the earlier more traditional decks convey messages through the pictures. The 10 of swords has a person laying on the ground with 10 swords stuck in them. You don’t take it literally- but you sure do get the essence of the meaning. I think the Treason card is the same.

4-the phase you are in & which will pass- MONEY

The Money card I do want to take literally, who doesn’t. Looking at the picture, you see a woman with a bare breast shedding bills and coins from her hands. The feeling of this card is- money is not an issue during this phase, but remember it will pass too. Is there a significance to some nakedness in this card?

Lovely- Looks like there will be some arguments coming or “issues” causing a standoff. How long can a person sacrifice and help others before they put their foot down and demand their own time? When you see that you are being taken advantage of, you will have a misunderstanding, that is for sure…in 6 months yikes it’ll be April 2007. Sounds like spring fever to me.

..the love card. A relationship will be more prominent or important than the role of “servant” and I use that word loosely. The picture shows a cherub, with one visible wing indicating beginning stages. The couple in the background doesn’t care whether the cherub exists or not. Is this the same couple that had the misunderstanding in position 5……sure looks like it.

So how do we interpret that? 3 more months from now til then (Jan ’07)everything will run as it has been and then all hell breaks loose by 6 months. If the crossing card is Profit which has the final say- there will be more gain than loss unless the last card #10 overrides it with a powerful card. 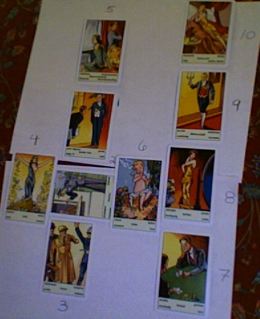 Interesting, this position would describe my role in everything right now. I would say Loss is a good word, loss of emotional freedom & time (all those errands, lol). The two chaps are playing cards and there is a pile of money with the one guy. There is a winner & a loser. In the scenario of the cards, I am feeling at a loss because the circumstances and health issues of family members has become “my reality” and it shouldn’t.

Hey isn’t that the same guy in the card that was in position 5 & 6? LOL

Another quite interesting card to have in this position. The Pride card would be the people in my environment that are ill but too proud to roll over and wait for their number to be called, if you know what I mean. They do not give up and keep on going….despite. Of course I have additional responsibilities but more on an emotional level.

This spot is the same as hope/fears. No I do not hope to be “of service” for too much longer and yes I do fear “of being in service”. The man in the picture appears to be well groomed and is lighting the way. Ahh, shed a little light on my fears and they disappear.

It truly is amazing how you can read these cards as you go along. Really, there is no instructional booklet necessary. Again there is a bright yellow and red- giving me the feeling of being passionately optimistic –

Great! looks like a unresolved, unfulfilled, burning heart. The woman in the card doesn’t look like she is in pain but I can sense there is an aching heart as she lies on the big bed. No man in the bed with her but did you notice the beautiful flowers with the envelope on the night table. Or is that a mirror?

The Celtic cross provides enough information so that you can get an idea of what’s to come and the cards usually describe a theme or area of manifestation. If we took the Art Deco Wahrsagekarten through the Astrology wheel, 12 houses – you would get more specific data and how it applies to a variety of segments of your lifestyle.