When I do a reading, I take all the groups around the central themes such as love, partners, job, money, travel etc and study them by making notes of all the possibilities.

I did the above notes (reading) on August 27th, few days ago. The section where it is circled scythe+anchor I wrote -loss of job. At the time I just couldn’t figure out who the heck this was. I just received a phone a few minutes ago from a close someone and was informed that the son-in-law got fired from his job.
There is a strong message of the cards of a pending mishap on the road- I don’t know if this is related to the loss of job or if it is a reaction…The cards are meshed around this news. 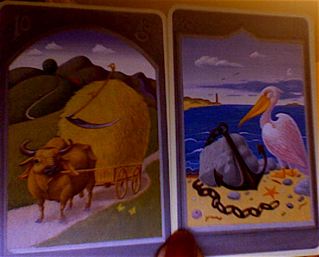 In the Mystical Lenormand which is the deck I used for the full 36 block layout, the scythe does not have the Jack of diamonds in the background(I think I mentioned this before) but since I know this, I remember telling my daughter the news was around a young man. If you look closely at the anchor card on the right side, the anchor is placed against a rock on land and the chain is not attached to anything. When I saw these two cards I immediately knew there would be a cut in security(job) but what I did not know exactly who it was except that it was a young man. In my notes you can see the 9 card block I was studying, in the next row beside the scythe is the anchor card (and that is on the flip side of the paper).

It is always a good idea to keep records of all your readings, and by making notes (even if they don’t make any sense at the time), you can refer back and study as to why or why not it made sense.

2 thoughts on “Cards are right again.”